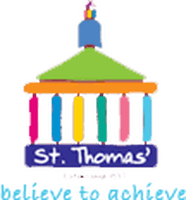 At St Thomas’ key stages work together in mini phases (Nursery & Reception, Year 1 & Year 2, Year 3 & Year 4, Year 5 & Year 6)  to collaborate and share ideas. This means that the objectives from the National Curriculum are based on a 2 year cycle.

During our Geography lessons, teachers support the children to learn how to become geographers. They help the children to develop the skills to conduct fieldwork, learn about maps (including OS maps), atlases & globes, and use compasses and 6 figure grid references to find out about the UK and the world around them. Children are encouraged to first learn about the local area and expand their knowledge outwards to compare the similarities and differences of physical (natural) and human (man made) features to that of different places around the world. Teachers develop the children’s knowledge through a range of activities and the children are taught lots of geographical vocabulary which they use to explain their understanding. Children are supported to make links in their learning by building upon prior learning in earlier key stages.

Whilst learning about physical geography, the children are taught about the counties and capital cities of the UK, the continents and seas and the seasons. They also begin to learn the names of countries and capital cities in Europe and America. As the children explore these countries, they begin to build up knowledge about rivers, mountains, volcanoes & earthquakes, climate zones, vegetation belts and biomes and the water cycle.

Whilst learning about human geography, the children begin by discussing different types of man made structures in Stockport e.g. the different buildings, roads, railway, bus station and the viaduct. As they learn about the wider world, they are taught about types of settlement and land use, economic activity including trade links, and the distribution of natural resources including energy, food, minerals and water. Children at St Thomas’ learn about different places in the world by exploring the following geographical concepts:

In EYFS (Early Years Foundation Stage), children learn about the world around them through ‘Understanding the World’. They are supported to learn about their immediate area and the seasons and are encouraged to talk about and compare contrasting places in the world through the use of stories and photos. Children in EYFS also conduct simple fieldwork and create simple maps.

In Key Stage 1 (Years 1 & 2), the children use the skills and concepts above as they begin to expand their knowledge by learning about the school and it’s grounds, Stockport, the countries and capital cities of the UK and finally the world as they learn about the continents, North and South poles & the equator and do a local area study comparing a small area of Stockport to a small area of an African village. The Children in KS1 also learn about seasonal and daily weather patterns, conduct fieldwork, learn about the 4 compass points (North, East, South and West) and carry out map work.

In Lower Key Stage 2 (Years 3 & 4), the children use the skills and concepts above as they explore the physical and human features of the Uk and its regions (especially the North West), and begin to explore Europe and North/Central America. They will learn about:

In Upper Key Stage 2 (Years 5 & 6), the children use the skills and concepts above as they continue to explore the physical and human features of the Mediterranean and South America and learn further about the UK by learning the cities and counties of the UK and the migration of people to Britain. They learn about:

We try to encourage the ore and wonder of geography through a range of trips and the use of fieldwork and mapwork.

We use necessary cookies to make our site work. We'd also like to set optional analytics cookies to help us improve it. We won't set optional cookies unless you enable them. Using this tool will set a cookie on your device to remember your preferences.

Necessary cookies enable core functionality such as security, network management, and accessibility. You may disable these by changing your browser settings, but this may affect how the website functions.